Skip to content
You are at: Home » Bitcoin Values » Is Bitcoin Legal? Bitcoin’s Legal Status By Countries

Is bitcoin legal? This is one of the questions many bitcoin investors and potential investors are wrestling with on a daily basis. If you have heard about Bitcoin but are unfamiliar with how it works and where to use it, join the crowd. Thousands of individuals are still unaware or have only heard of Bitcoin but have not yet used it. This article will clarify and explain the uses and ins and outs of this new digital currency.

What is Bitcoin? Bitcoin Explained:

Bitcoin is a new online digital currency that allows transactions to be made without a middleman, which means no banks, no transaction fees, and no reason to give out your real name. Every day that passes, more merchants are accepting them. With Bitcoin, you can purchase pizza, web hosting services, and just about anything else you can find on the Internet.

Bitcoin can be stored in the cloud or on an individual’s computer in what’s called a Digital Wallet, which is similar to a virtual bank account that permits users to pay for goods, send or receive Bitcoins, or save their money; however, Bitcoin Wallets are not insured by the FDIC.

Although every Bitcoin transaction gets recorded in the public log, the names of sellers and purchasers are never revealed; only their Bitcoin Wallet ID number, allowing users buy or sell anything without being traced. In addition, international payments and transactions are simple and cost-effective because Bitcoin is not yet subject to regulation or tied to a specific country. Small business owners benefit from Bitcoin because they don’t include transaction fees, while countless individuals see it as an investment that will likely go up in value in the near future.

CHECK OUT: What is Bitcoin  Video For Starters

Is bitcoin legal? Many individuals are concerned about the legalities of Bitcoin; however, it is currently legal in all 52 states in the United States of America, although each state has their own policies. California recently enacted a law making bitcoin and other virtual currencies officially legal in the state. Following is a list of countries where Bitcoin is legal, illegal, and where it is restricted. 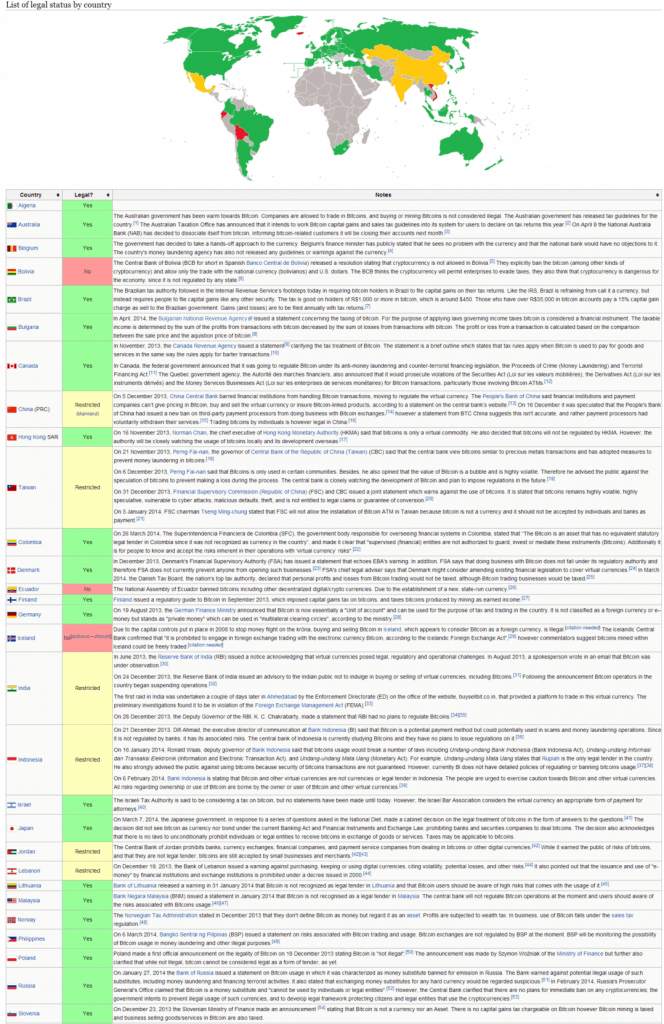 Is bitcoin legal? Nobody really knows what the future has in store for Bitcoin. Currently, it is a legal currency in most countries that remains mostly unregulated, but that will more than likely change in the future; most governments are way too concerned with their lack of control over money and how to tax it.

1 comments on “Is Bitcoin Legal? Bitcoin’s Legal Status By Countries”