Skip to content
You are at: Home » News » Adoption » How China has built a Bitcoin empire in just three months

The story that links China and Bitcoin is not new. This successful relationship has been going on for a while now, but what matters here is not just time or money, but rather the magnitude of the empire created by the country faster than a lightning.

While the world lived a crazy beginning of the year, with Bitcoin’s value skyrocketing – from $13 per coin to $300/BTC in April -, dropping down to around $90/BTC and then stabilizing until this week, when it started going down again, the Chinese keep their cool and built a true empire.

This price fluctuation could worry a lot of countries, but not China. In just three months, the small groups of scattered miners have become a huge and organized industry, not to say fruitful. When it comes to cryptocurrency, there’s nothing missing in China, from customized mining chips manufacturers to professional Bitcoin investment services.

And that’s just a small fraction of the Bitcoin universe that speaks Chinese. The country already has its own platforms like btcchina (one of the oldest services in the field with two years of existence), btctrade or FXBTC. These services aren’t necessarily recent, but their popularity has shot through the roof in the last few months. This traffic chart (made by Alexa about btcchina) proves it: 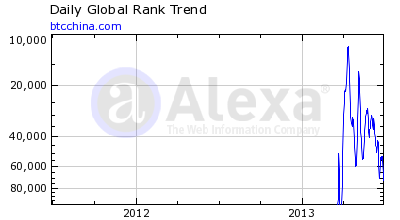 As you can see, the sudden growth of interest in Bitcoin is reflected in this data, which show a steeply increase at the end of the first quarter of 2013. And, then, there are the merchants that are also starting to see Bitcoin as an opportunity, like the famous e-commerce site Taobao, which already accepts cryptocurrency.

What remains to be seen is how China’s government will handle the Bitcoin subject once it gets too big. They might not like it, but they also might not care. Until now, the authorities have been quiet (at least, officially).