The Bitcoin mining pool Ghash.io is involved in controversy for the second time in a year and for the same reasons: with the pool harnessing more miners and more power over the last few weeks, the possibility of a theoretical ‘51% attack’ is getting bigger.

The first time the Bitcoin community worried about this possibility was back in January, but several warnings spread across the web were enough to stop a possible attack. At the time, the pool’s representatives claimed they were not trying to provoke the attack.

GHash.IO does not have any intentions to execute a 51% attack, as it will do serious damage to the Bitcoin community, of which we are part of. On the contrary, our plans are to expand the Bitcoin community as well as utilise the hashing power to develop a greater Bitcoin economic structure.

If something happened to Bitcoin as a whole it could risk our investments in physical hardware, damage those who love Bitcoin and we see no benefit from having 51% stake in mining.

However, the situation is repeating itself with the pool conquering 50 percent of hashing rate this Friday (13th), at the time of writing.

Ghash.io’s “secret” relies in its connection to Cex.io, one of the first cloudhashing services adopted by a large number of users. Customers can buy mining contracts from the company and receive the mines BTC without having to buy hardware or download and install the necessary software. This partnership, along with the pool’s loyal miners and its ‘no-fees’ policy, have lead to the uncontrollable growth of this mining pool.

Smith says he understand the “the Bitcoin community strongly reacts to Ghash.io’s percentage of the total hash rate”.

However, we would never do anything to harm the Bitcoin economy; we believe in it. We have invested all our effort, time and money into the development of the Bitcoin economy. We agree that mining should be decentralised, but you cannot blame Ghash.io for being the ‘number one’ mining pool.

In January, the mining pool grappled 40 percent of the total hashing rate, sending the Bitcoin community into a frenzy. In the aftermath of the event, Ghash.io put out a press release revealing its Mitigation Plan to prevent future problems. Nevertheless, the team behind Ghash.io has yet to fulfill their promise.

When questioned by CNN about the steps taken to ensure something like a ‘51% attack’ does not happen, Cex.io’s chief information officer refused to answer. Instead, he said “the Bitcoin community determines the comfortable level of the Ghash.io’s percentage. We aim to please our users and provide quality trading and mining environment, while maintaining stability and prosperity of the Bitcoin community”.

There is already a bet going on at the website BetMoose.com titled “Ghash.io will reach 51% (or more) in the next month”. So far ten people gambled on the “yes”, while five people bet on the “no”. 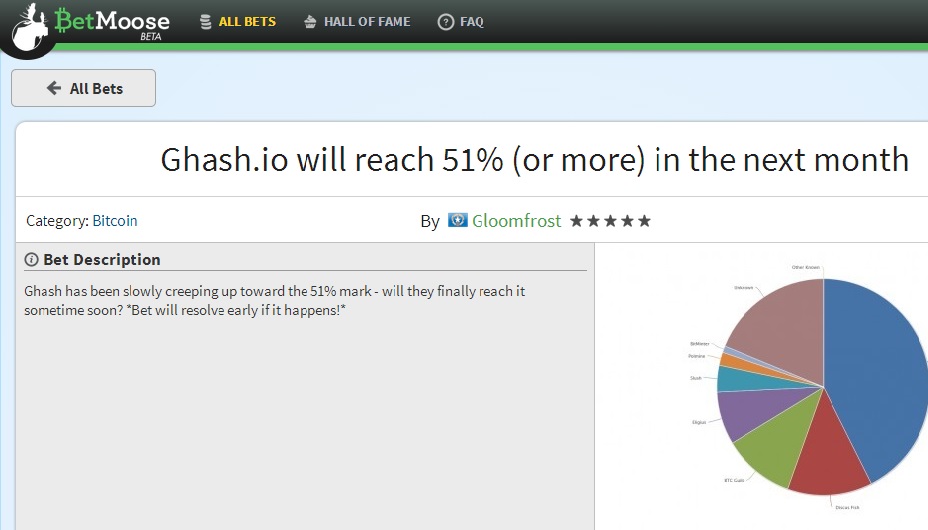 Still, several experts and Bitcoiners, like Andreas Antonopoulos, do not believe in the possibility of a ‘51% attack’, mainly because such an event would not benefit Ghash.io or whoever tried to provoke it, as long as they were part of the Bitcoin community.

Antonopoulos even posted its opinion on Twitter a few days ago saying that he is not worried about a possible attack, since it would “completely contravene the incentives of miners”.