Skip to content
You are at: Home » Bitcoin Values » Facebook Engineer Ben Davenport Joins One of The Newest Bitcoin Startups BitGo

It’s no longer Google, Facebook and Twitter competing for the best technical engineers. Mama, here come that man! That man I am referring to is bitcoin. Software Engineer Ben Davenport of Facebook, Inc left the company late last week to join one of the newest bitcoin startups BitGo – a bitcoin security company with the aim of helping bitcoin owners and bitcoin exchange companies and repositories better secure their assests in bitcoin. Ben is one of the early investors in bitcoin and decided he will better serve bitcoin and its progression by dedicating his brain full time to the virtual currency. Ben told CoinDesk that: “The way I think about Bitgo is it’s a pioneering leader in security for bitcoin.” and we at bitcoinvalues.net are happy to see another bright mind working to help secure bitcoin giving the unfortunate hacking of many of the early established bitcoin exchange companies.

BitGo – One of the Bitcoin Startups Focusing on Security

BitGo is billed as one of the first bitcoin startups to have created an adanced bitcoin wallet with a security infrastructured called multi-signature or multisig. Other companies use a public and one private key, which are less secure and create a lot of risks for bitcoin traders because a lost of the bitcoin private key spells doom; means the funds will no longer be accessible to the owner and if the bitcoin private key is stolen, the bitcoins and funds can be easily transferred to the thief or thieves accounts accross the web.

The structure of Multisig is three times more secure because it uses several private keys. All three private keys must be activated and confirmed before bitcoin can be transferred between parties or withdrawn. One of the advantages of this system when it comes to loosing and stolen private keys is, if one of the private keys are stolen or loss the waller owner can still control and access the bitcoins using the remaining two private keys and immediately de-activate and replace the stolen or lost private keys! An example of BitGo private keys structure is illustrated in the image below. 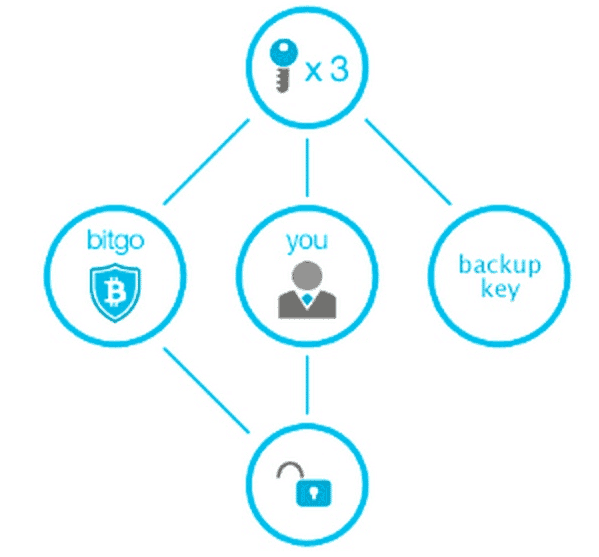 BitGo – one of the bitcoin startups focusing on security, however is still not satisfied. The newly acquired partner Ben Davenport said the company is still building more complexed security schemes for fight more hackers. Ben said that hackers find new ways to intrude on a daily basis and that companies such as BitGo should never feel complacent. “This is really bringing the same type of [multisig] technology to companies that want to hold and transact bitcoin,” stated Davenport. “All those people need to transact with bitcoin, but need to be able to have business roles in place,” He continued to say. “Spending limits, velocity limits and approval chains.”

Ben Davenport joined Facebook after the company retained him as part of a packaged deal after Beluga, a company he co-founded was acquired by Facebook. Ben and other investors fund bitcoin startups through AngelList syndicate, a company/website that provides “technical advice, help with product design & scaling, introductions” to bitcoin startups as well as established bitcoin companies. “I have connections to a lot of people in the Bitcoin world”. Ben claimed on the website.