Skip to content
You are at: Home » News » Wallets » A physical Bitcoin wallet with biometric authentication? CryptoLabs is launching one in 2015

The name Case was probably inspired by its compact size. We are talking about a new cryptocurrency hardware wallet, which measures around 86mm by 54mm, and will be available in 2015 thanks to the Bitcoin startup CryptoLabs.

The physical device will enable the users to buy and sell cryptocurrency, as well as send and receive BTC. But one of the device’s biggest surprises is actually its advanced security features, such as biometric authentication.

Case will also offer a multi-signature feature based on three different keys, each stored in a different location and secured by a unique layer of authentication. This is where biometrics join the party, with one of these layers being fingerprint scanning. Besides, the device is also equipped with a SIM card that enables  it to be used in over 60 countries worldwide.

“I think that something that echoes in Bitcoin is not having to trust anything. We’ve done everything in our power to make sure you don’t have to really trust us”, the company’s CEO, Melanie Shapiro, told Coindesk.

She is talking, for instance, about the distribution of the three keys: one remains with the end user, one is stored in a server and the other one goes to a cold-storage facility managed by an independent third-party.

If there’s a hack on a server, [the attacker is] only ever going to have access to one key. You have to get into cold storage and steal the finger off somebody’s body to get into their Bitcoin. So the security of it is fairly robust.

CryptoLabs’ newest product wants to be the perfect mix between a digital wallet and a hardware solution. “The difference is that this is an actual wallet. You can take it with you. Trezor has to be plugged into your computer for you to use it. This plugs into nothing”, she added, comparing Case with the well-known Trezor wallet. 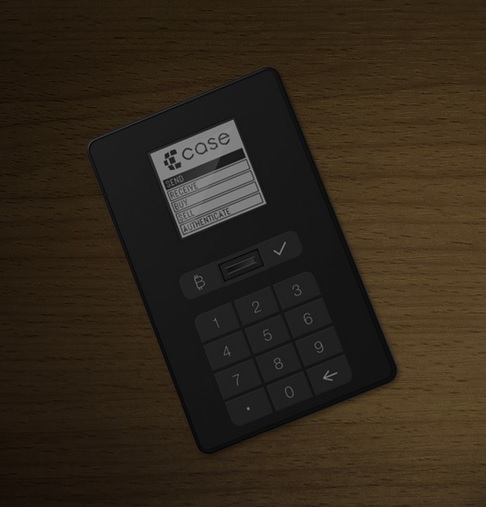 Another big difference between devices like Trezor and Case is the design of the hardware wallet. “When you think about payments, embedded in our minds is the idea of credit card. That shape is what we think of when we think of payments”, Shapiro said.

That is why Case was designed to be sleek and modern, small enough to be carried in a pocket or even in a traditional wallet.

In the future, Shapiro hopes to launch a thinner physical wallet that truly mimics a credit card. The CEO believes “there’s room in this industry for a leading hardware product and I think that the community is going to react well to this. It solves a number of problems, plus it’s cool”.