Skip to content
You are at: Home » Bitcoin Mining » Hardware » Antminer S15 Review

The S15 is an ASIC miner for Bitcoin and altcoins which share its SHA-256 algorithm. Titled the Antminer S15, the device was launched on the 8th of November 2018.

In this article, I’ll review the miner and conclude whether the frequent criticisms of the device are in fact justified or unfair.

The Antminer S15 was released on November 2018 with a maximum hashrate of 28 TH/. It was quickly replaced by its successor the Antminer S17 (with almost double the hashrate and a lower power consumption). The S15 seems to be more profitable using its energy saving mode, however it will still take several years to return the investment on the hardware.

That’s it! If you want a more detailed review about the S15 keep on reading. Here’s what I’ll cover:

This is the first ever implementation to use a 7nm manufacturing process. Smaller circuitry requires less electricity to power, so naturally, this improves the miner’s electrical efficiently. For comparison, the previous generation Antminer S9 uses 16nm architecture and produces about 50% less hashrate for the same power expenditure as the S15.

Another important difference is the integrated power supply unit (PSU) for this miner. Previous versions had a separate PSU, which customers needed to purchase additionally, either from Bitmain or another manufacturer. 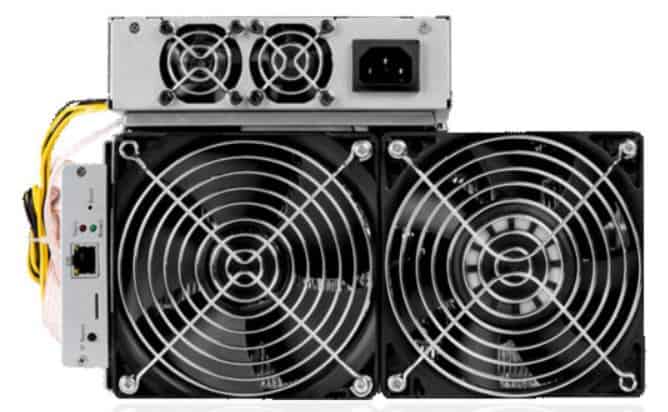 This is no longer the case with the Antminer S15, which now comes complete with an attached PSU. Not only more convenient, this change decreases the cost of import taxes when compared to purchasing a separate PSU from the China-based Bitmain company, and also lowers the complexity of installing and maintaining these miners.

Finally, this miner comes with two types of operation mode. One is for maximum performance and the other is an energy-saving mode. The performance of the S19 miner differs significantly according to the setting. Surprisingly, the energy-saving mode is actually more profitable than the max performance mode, as it is more energy efficient.

Saving on electricity costs is the key to increasing your profits as a miner, so rather than mining as much coin in as short a time as possible, the Antminer S15’s energy conservation mode is a great way to mitigate energy costs and increase profitability over the long term. 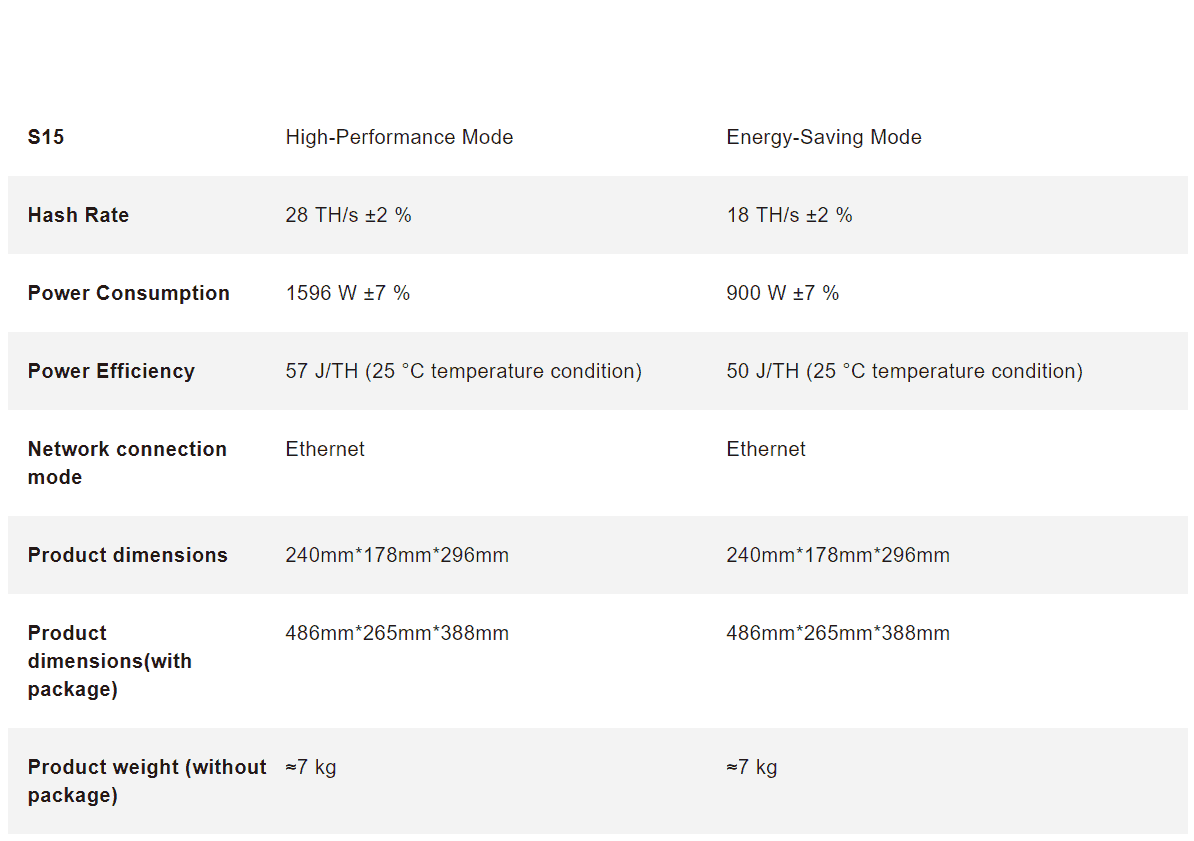 The Antminer S15 is capable of producing 28 TH/s worth of processing power in its high-performance mode, while the energy saving mode provides only 18 TH/s. However, the energy saving mode lowers the energy requirements by the substantial amount of 700 Watts. The relative power efficiencies are at 57 and 50 Joules per Terahash, respectively.

The S15 weighs a rather whopping 7 kg, which will certainly reflect in shipping costs, and is relatively noisy at 76 decibels.

3. Is the Antminer S15 Profitable?

In order to determine profitability, you should run the above specs (and your power costs and mining pool fees) through our Bitcoin Mining Calculator. Keep in mind that Bitcoin’s price and mining difficulty have changed since this article was written. However, if you use our calculator it will automatically give you the up to date numbers for price and difficulty so no need to worry about that. Just follow the same logic I’ve used below.

With the above inputs, the calculator returned a profitable result. However, I am certain that this marginally-profitable result is not worth the high price tag of this machine. Unless you anticipate a dramatically higher Bitcoin price in the future, I would advise against running the device in this mode.

The Antminer S15 surprised me with this result. It’s actually more far profitable to mine BTC using this mode, even if it produces less BTC as a result. The cost reduction in terms of electricity doubles the profitability of the machine!

Unfortunately, $14.99 per month is still a rather negligible amount that virtually ensures a negative return on investment, barring the unlikely circumstance of a major Bitcoin price rise without a corresponding increase in difficulty. Unless paying significantly less than 11c per KWh, it’s unlikely one will break even on an S15 which probably restricts this device’s appeal to professional crypto miners.

Assuming that you purchased your Antminer S15 for $1400 and all of the parameters used in the calculations remain stable, then it would take 7.7 years for your miner to pay for itself.

That is a very long time, and with new miners on the horizon, it would not be a wise choice to invest your hard-earned money in this miner.

Additionally, the market has already been saturated with these machines. When it was initially released, it was able to produce a profit of up to $136 per month. The overall community didn’t like that figure, as even at that more profitable figure it was judged that the S15 would take too long (around 240 days) to pay for itself.

While the Antminer S15 was capable of producing a higher return on investment when it was initially launched, it can no longer be considered a “good” investment. As new, more powerful miners enter into the market, the time it takes for your S15 to pay itself off will only increase.

In my opinion, you’re better off checking out the Antminer S17, which Bitmain promises will offer better performance at a lower energy rate. New and forthcoming ASICs from competing mining manufacturers may also prove better value.

Unfortunately, this miner is not worth the investment, noise, or heat for the average home miner. In the modern ultra-competitive mining environment, this device is already looking slightly dated.

If after reading this article you still decide to purchase one of these units, you’ll need to find a reseller on a site like eBay or Amazon. Otherwise, you’ll have to wait for Bitmain to announce and begin taking orders for its next production batch of the S15, which may have slightly tweaked specs to those discussed below.