Skip to content
You are at: Home » News » Bitcoin London 2013: Europe’s love for cryptocurrency, a new ATM machine and a lot of start-ups

The big conference Bitcoin London 2013 happened this Tuesday (2) in the British capital. Check out the major conclusions of the meeting.

1. Who likes Bitcoin the best: Europe or the USA?

The North-American regulators have been making Bitcoin’s life really difficult and the cryptocurrency startups are not happy. On the other hand, Europe still sees Bitcoin like a harmless unit, so the old continent might be a better place for some companies right now.

According to the experts in London, the United States has made one fatal mistake: it should not have classified Bitcoin as a currency so early in its development. 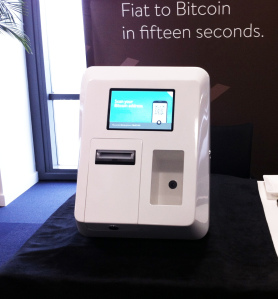 To use this new ATM machine, you will need to have a Bitcoin wallet number and, first, scan the QR code of your Bitcoin address. Then, you have to feed bank notes into the machine and they will be converted to cryptocurrency, at the current exchange rate, and deposited into their account. For now, it can still take several minutes to update an account.

3. Why Bitcoin would be perfect for Iceland

Iceland should adopt Bitcoin as its national currency, according to the economist Sveinn Valfells, who talked this Tuesday at Bitcoin London 2013. As stated by the expert, Iceland is an extremely wealthy nation with a damaged financial system. The country needs desperately of a new currency and the crypto-coin might be an ideal solution for the nation’s problems.

“It has far from adjusted from the 2008 crash. It has a large overhang of hot money, and bloated and expensive banks. It has also a history of not managing its currency so well. Bitcoin meets straightforward criteria: it’s getting close to the market cap of $1B needed for a comfortable margin and, in the matter of governance, it already has a structure so it’s getting there”, Sveinn Valfells explained.

Bitcoin London 2013 was the stage for another big announcement. This one was made by OpenCoin, which revealed that Ripple users can now make payments to all Bitcoin addresses directly from the Ripple client. This means that Ripple users now have access to over 8,500 Bitcoin merchants and also to the entire Bitcoin economy. The innovation is called Bitcoin Bridge.

“This is both an important milestone for Ripple and a powerful demonstration of the promise of the Ripple system. Now, anyone can send Bitcoins without having to use a central exchange. At the same time, any merchant accepting Bitcoins now has the potential to accept any currency in the world”, said OpenCoin CEO Chris Larsen.

Bitcoin has proven its amazing expansion in London with the presentation of new start-ups from places like Argentina, Brazil, Israel and the United Arab Emirates.

We are talking about names like the Israeli company Bits of Gold, which will launch its services this Autumn, and Lamassu, the company that developed the Bitcoin ATM machine that we already talked about and that will be launched this August. There was also time to Bex.io’s showcase, a project aiming to “help Bitcoin business entrepreneurs manage the technical side of the operation so they don’t need to worry about it”, the representative Yurii Rashkovskii said. Finally, the UK-based project Bitprice was also at the conference.

6 comments on “Bitcoin London 2013: Europe’s love for cryptocurrency, a new ATM machine and a lot of start-ups”