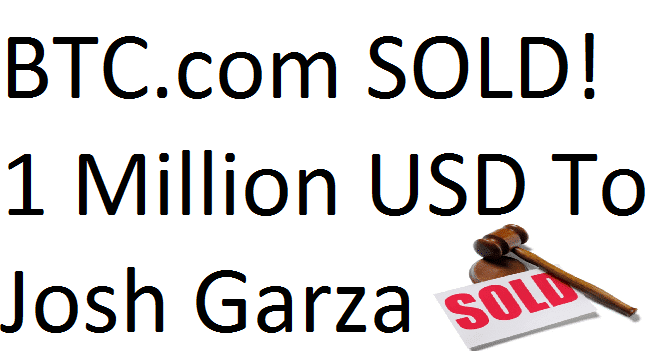 Josh with his company GAWMiners is one of the major bitcoin mining players in the bitcoin community and his investment in BTC.com shows how much he is willing to go to promote bitcoin and its causes. We are hoping other bitcoin and potential bitcoin investors took note. This is another sign that bitcoin as a cryptocurrency is here to stay and is bound to take over the world currency market by storm. with companies like Bitfury raising load of money and more bitcoin and bitcoin related companies coming out with IPOs, it will be foolish if not outright embarrassing for the big time financial players to be left behind the bitcoin bandwagon.

RELATED: How to Get Free Bitcoins with Bitcoin Faucets That Really Pay

cryptocoinsnews reached out to Josh and he said this:

How has Bitcoin changed your life, and the way you approached money?

Bitcoin is Money. It certainly gives a new perspective on a universal currency and the value of everyone believing in the same currency. That is a big reason why I got into it to begin with. I would say, for me personally, it has helped me understand; I am not this guy who just believes my company needs to grow, I feel the industry as a whole needs to grow. For me, it is that we need to invest in what we believe in. There is no better way to show you believe in something than by investing your money and time. Back it up with your checkbook. For me, I believe in this industry, and I am willing to invest my money I have made in my other companies to support it and help it grow. That is how it has changed my perspective.

The team at BitcoinValues.net would like to take this time to congratulate Josh on his big bitcoin domain name BTC.com purchase and wish him luck. We are pulling for you Josh!