I got to admit, this post is a little silly since it has nothing to do with the actual Bitcoin world. However I found myself downloading a mobile game called “Bitcoin Billionaire” by NoodleCake Studios a few days ago and since then got heavily addicted.

What is Bitcoin Billionaire?

Bitcoin Billionaire is a mobile game for iOS and Android in which you play a young entrepreneur who decides to start mining Bitcoins in order to become rich. The game is pretty simple, you tap the screen in order to mine Bitcoins and you invest your newly earned coins into new Bitcoin mining rigs and other investments that yield Bitcoin. From time to time financial events will occur – like Bitcoin’s price going up, someone robbing you, etc. This will of course affect your overall wealth.

I’m sure it doesn’t sound very interesting at first, I didn’t think it had much to it as well. But somehow, through the simple gameplay, cute graphics and funny character quotes you find yourself getting addicted to this, well….stupid, game.

Mostly I play this game when I’m trying to pass the time as there’s nothing much to do other than tapping the screen as much as you can. When the game starts you’ll a short message (see below) – I couldn’t agree with it more now that I’ve played the game for the past week. 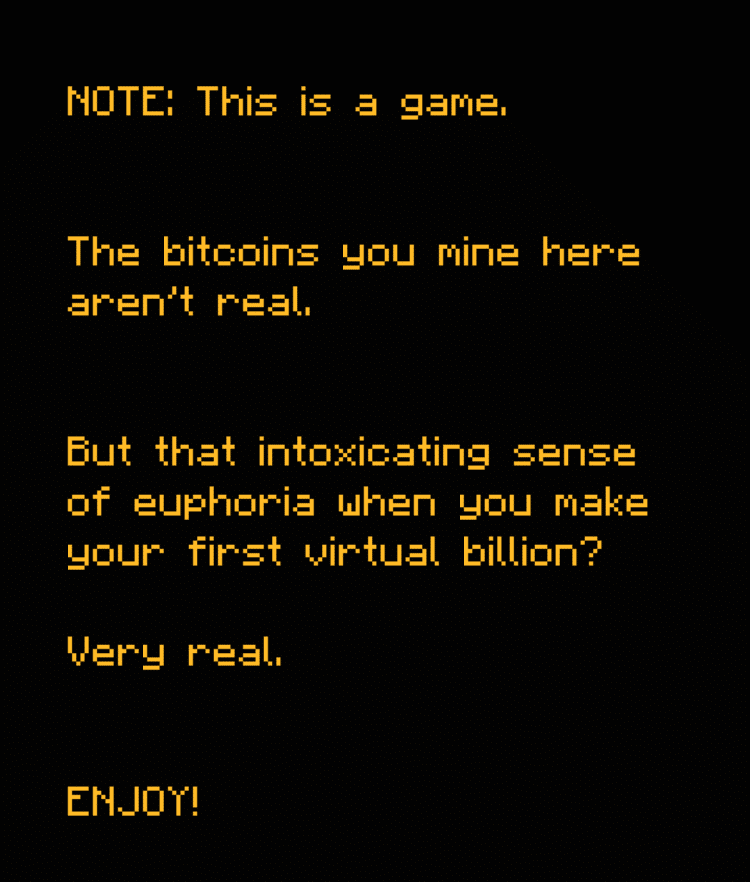 As you progress throughout the game your scenery will change, you will get to new clothing, pets and even get to travel through time, trust me it’s all very enjoyable. And apparently not just for me, the game got a 4.5 rating from over 185K reviews on Google Play and a 5 star rating from over 33K reviews on the app store. 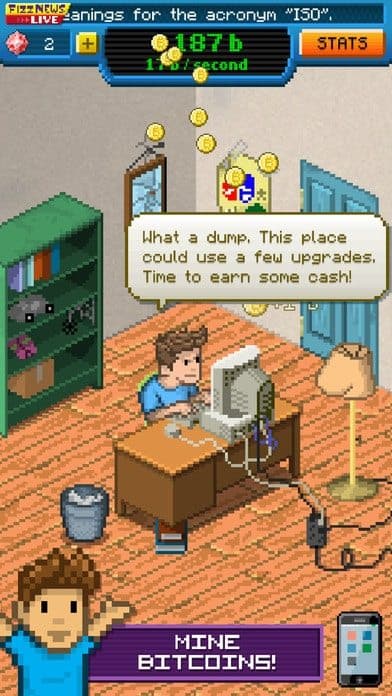 If you want to play the game you can download it for Android here and for iOS here.

For those of you who don’t wish to play fair and want to cut to the chase you can find a sizeable amount of hacks online. These will usually come in one of two forms:

Unfortunately the first option is probably gone, since I couldn’t find any game glitches that haven’t been rendered by the game developers (if you know of anything like this please  add it in the comment section below).

The second option is risky, because you’re basically downloading and executing a file on your phone that you do not know its origin. This means that the file may contain malware or some other nasty stuff, so do this at your own risk.

WARNING: Use these downloads at your own risk, I have not tested out any of these APKs (I don’t own an Android). Don’t install any software from someone you don’t know on a device that has sensitive information (i.e. Bitcoins, passwords, etc.)

The term “mod APK” stands for “modified Android applications package”. It’s basically a cracked file of the original game with some modification. For example, you can find a modification that gives you unlimited Hyperbits,  a mod that supplies you with unlimited Bitcoins or even free shopping.

WARNING: Use these downloads at your own risk, I have not tested out any of these APKs (I don’t own an Android). Don’t install any software from someone you don’t know on a device that has sensitive information (i.e. Bitcoins, passwords, etc.)

All in all Bitcoin Billionaire is a great time passer, even though it doesn’t have anything to do with the actual Bitcoin other than its name. I wish the company would have made a game that is as educational as it is fun to play. Perhaps this would be a great way to teach people what Bitcoin is.