Skip to content
You are at: Home » News » Bitcoin ATMs produced by Robocoin and PayMaq hit South Korea and Spain

South Korea will be the next Asian country to host a Bitcoin ATM produced by the American company Robocoin. The news was recently announced by BitcoinAsia, a new cryptocurrency venture company based in the country that will be responsible for the device.

The machine, which allows the users to convert fiat currency into BTC and the other way around, will arrive in the country this Friday (21). Two more should be delivered by Robocoin to BitcoinAsia during the next month.

However, the first ATM, which will be located in Seoul, will go through the local government’s certification process before kicking-off all operations.

“We are excited to introduce the Bitcoin ATM to the most tech-savvy market in the world. Bitcoin is attracting public attention in Korea, and we want to take the Bitcoin awareness in Korea to the next level by adding a simple way to purchase and sell Bitcoin”, said Jewoo Yeom, vice president of BitcoinAsia, a subsidiary of the game developer Liveplex.

Robocoin, the Nevada-based manufacturer that is currently planning to install two Bitcoin ATMs in the United States, is also shipping 39 additional units worldwide in March. Some of them will go to other Asian destinations, but also to Europe.

Still, South Korea could still be the first Asian market to offer a Bitcoin ATM if every part of the regulation process goes smoothly.

Barcelona gets a special BTC machine

Farther west, Spain is also getting its first Bitcoin ATM, but this one is not produced by Robocoin or Lamassu, the two main manufacturers. The company PayMaq has announced the arrival of its Cajero Bitcoin, a machine that will allow the users to buy BTC with fiat currency, as well as sell the digital coins and receive cash. 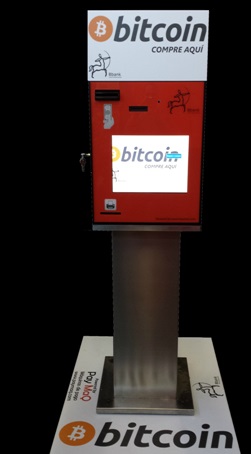 The device, developed by the Spanish payment systems company, is able to read the national ID card in order to authorize and process the transactions.

PayMaq’s Bitcoin ATM will be located in Barcelona, at the shopping center Diagonal Mar. The machine’s launching is happening this Saturday (22).