Skip to content
You are at: Home » News » Opinion » Bitcoin 2014 Convention Highlights

The Bitcoin2014 convention took place in Amsterdam on the 16th and 17th of May. I actually took part in the convention and wanted to share some of my experiences. First some numbers…

There were 1100 registered attendees in this event which makes it I believe to the biggest Bitcoin convention yet. 120 speakers presented in 4 different slots. Also there were over 40 exhibitors competing for the audience’s attention. Overall people from 50+ countries attended and it was a pretty impressive event. Apparently the Netherlands is considered to be No. 6 in the world when looking at Bitcoin activists per quota.

The convention kicked off with a keynote presentation from Overstock’s CEO Patrick Byrne and a screening of a very impressive short film about how Bitcoin helps people in Uganda.

Circle want to become the Paypal of Bitcoin

One of the more interesting presentations I’ve attended was of Jeremy Allaire, CEO of Circle. In this presentation Jeremy talked about the barriers Bitcoin has to becoming mainstream and how a more intuitive Bitcoin solution is needed. He went on to present Circle – a newly founded startup that allows you to buy your first Bitcoin within minutes. It’s pretty similar to Coinbase at the moment aside from the fact that the whole process of buying Bitcoins is much faster. Circle is currently on invite only and you can register on their website to get in line.

The State of Bitcoin

Later on in the day a presentation by Gavin Andersen, the chief scientist of the Bitcoin foundation talk a bit about the state of the Bitcoin protocol and the obstacles that Bitcoin is facing in the coming year. The main message was that Bitcoin went a long way the pass year. It is more stable and more secure and more people are coming aboard to help support the development. 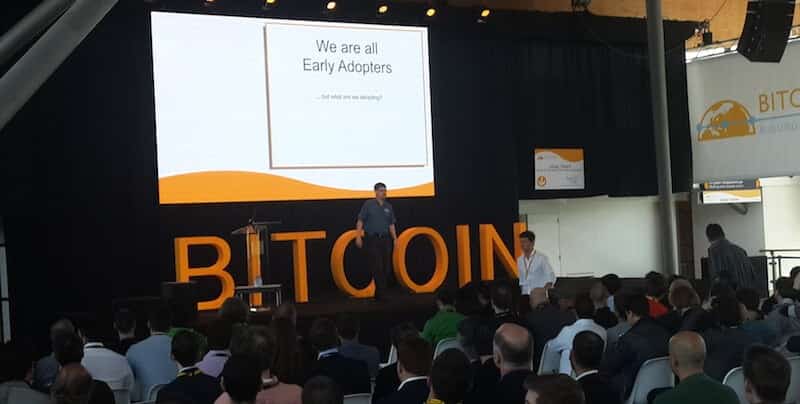 By the end of the first day it was time for the first annual Blockchain awards. Prominent individuals and companies were recognized for their work. The most surprising award going to Satoshi Nakamoto for his article “Bitcoin a peer to peer electronic cash system”. Gavin Andersen playing Satoshi came to receive the award and the whole thing was pretty amusing.

Coffe and Bagels for Bitcoin

The local coffee shop (not that kind of coffee shop) that was located right near the conference decided to accept Bitcoin. I’m not sure whether this was specifically for the convention or not but it was refreshing to see the writing up on their window. 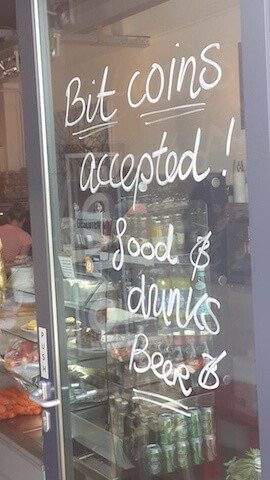 The next big Bitcoin startup

On the second day of the convention the most interesting topics to me at least were the Bitcoin startups. There was a Bitcoin investors panel which was pretty interesting where I got to learn about BTCJam – A website that uses Bitcoin to allow people to borrow money from strangers using better terms than what they would have received at their bank. It was also nice to see how many investors are looking for a way to get Bitcoin more mainstream.

The startup challenge which was 4 new different Bitcoin startups competing against each other was pretty embarrassing in my opinion and didn’t bring anything new and exciting to the table. It seems as if no one really screened applications before accepting them but I might be mistaken.

I have to see that all in all I pretty enjoyed my time at Bitcoin2014. It’s amazing to see how much the Bitcoin community has evolved since I first encountered it over a year ago. In 2 months I’ll be attending Inside Bitcoins TLV in Israel, in hopes to bring some more exciting news.