Skip to content
You are at: Home » News » Bit4coin announces news for 2014 after selling more than 1,000 BTC gift cards

If you were one of the people who got a gift card with Bitcoins inside for Christmas, you will want to read this article. Bit4coin, the company that made this idea into reality, grew significantly throughout December and has already sold over 1,000 gift cards.

During these first months of activity, the Amsterdam-based company estimates that 60 percent of the cards sold were bought and redeemed by the same person, as the remaining 40 percent were offered as a present. “Interestingly, most redemptions did not happen on Boxing Day or December 26th, but on January 2nd”, Dolf Diederichsen told Bitcoin Examiner. 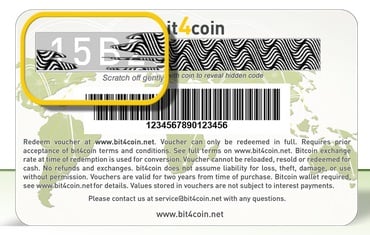 Most orders came from France, followed by the United Kingdom, Germany, Italy and Spain.

“France on first was surprising to us as we were only available in English at the time. Customers from the United States unfortunately have a hard time paying to our bank account in the Netherlands, given the prohibitively high international bank transfer fees”, the company representative added.

And what about “exotic” orders? Well, Bit4coin even processed a gift card for a customer in Greenland, but the best story, according to Diederichsen, came from a media and design company from Germany. “The CEO contacted us to buy a large set of €100 gift cards in order to give them to his employees. Who would not want to work for a company who gives out Bitcoins for Christmas?”, he asked.

For now, business has slowed down a bit, which is natural due to the end of the holiday season, but the balance is rather positive. Dolf claims the company is “more than satisfied” with these numbers. However, with 2014 here, it is time to boost the service with new ideas.

First of all, Bit4coin just added two new languages to the service, Dutch and German. But the company promises to keep adding more localized versions and payment options and is developing partnerships with online stores and retail partners, which will be selling Bit4coin gift cards during 2014.

Plans of expansion are also in the near future, Dolf Diederichsen reveals. “As we ship the cards from our office in Amsterdam, Europe is our target market for now. However, we are looking for partners to expand to other regions, especially the Americas, Middle East and Asia”.

According to the company, another big area that is being developed is connected to the payment options: “we are currently incorporating direct transfer methods such as iDeal in the Netherlands and Sofort in Germany, but also TrustPay for Eastern Europe. This will ease the big pain our customers have at the moment with making bank transfers. Next, we plan to offer digital voucher codes, so customers can choose to receive the card in the mail as before, or digitally on their phone, allowing instant redemption for Bitcoin”.