Skip to content
You are at: Home » News » Opinion » 7 Reasons Your Bitcoin Business is Losing Customers

Today’s post is dedicated for Bitcoin startups and businesses. I was invited to give a talk at the Bitcoin Expo in Shanghai regarding Bitcoin marketing for startups. The following is summary of what we went over in our talk.

This post is somewhat complementary to my original Bitcoin marketing for startups post which was posted about a month and a half ago. This post has much more tools and examples than the previous one.

You don’t know who your target audience is..

Before you start out with planning your marketing campaign you need to understand who is your target audience. In general I like to split Bitcoin prospects into 2 major groups: Newbie and Savvy. The Newbies require a different approach than the Savvies as they need more explanations and they speak a different language. Depending on your business you need to first decide who is your primary target audience.

Notice I said “primary” as it is completely possible to have both of these groups as your customers – but the key to success in marketing is focus. So pick one group and stick with it. In order to get a deeper look into your existing website visitors (if there are any) you can use Google Analytics’ Demographic and Interest Reports. Unfortunately this doesn’t come pre-set in your Analytics account and needs to be enabled as followed:

From various internet researches made the majority of Bitcoin users are between the ages of 25-34, male (around 90%) and are driven mainly by curiosity and profit.

One of the best things you can do in order to gain loyal customers is educate newbies about Bitcoin. Since Bitcoin has a very technical aspect linked to it many people find it confusing. So if you can come up with a short series of tutorials that help people how to get involved with Bitcoin you’ve already gained their attention. Moreover, make sure you’re not speaking “Bitcoinish”. Most people don’t understand concepts such as “hash”, “digital signature” or “minig difficulties”. Everything needs to be put out in laymen terms. I’ve said it before and I’ll say it again – show your product or website to someone who ins’t familiar with Bitcoin and see if they understand what’s going on.

Here’s a bad example of how to explain bitcoin (taken from Wikipedia): “Bitcoin is a software-based online payment system described by Satoshi Nakamoto in 2008 and introduced as open-source software in 2009. Payments are recorded in a public ledger using its own unit of account, which is also called bitcoin. Payments work peer-to-peer without a central repository or single administrator….” Easy to understand right ?

Give away free stuff to get people started

If you want to stand out you have to be willing to walk the extra mile. Sure you may have competitors but what can you do for yours customers that they can’t ? Companies like Coinbase or Circle understand that they are in a very crowded place and they want to make sure people come to them and not to their competitors – that’s exactly why Circle is giving away $10 to each new user.

Of course there is a downside to giveaways, especially if you give out money – you may encounter a lot of spammy visitors that sign up only for the giveaway. That’s why you should choose your giveaways wisely and put sufficient spam barriers. For example, in 99Bitcoins we give away a small amount of Bitcoins to each new subscriber. The idea is to help people who are new to Bitcoin, experience their first transaction without needing to spend any money.

Of course after the word got out about this a we received a lot of spammy requests from the same users. That’s why we made the process of getting the coins require that you authenticate your email and also send us a few words about yourself – this automatically raises the bar on the giveaway. We also monitor IP addresses and ban whoever is abusing this opportunity. Coindesk for example create a free quarterly report about the state of Bitcoin. This is a great way to position themselves as the leading Bitcoin news site.

If your giveaway adds actual value to your prospect then it will create what’s called a “magic moment” where your prospect has just become your raving fan. Now you can leverage this moment to ask for a favour. For example, after we send out people their 0.1 milliBitcoin we ask if they can spread the word about us on Facebook or Twitter, you’d be surprised how many actually do.

SEO is the most profitable strategy for Bitcoin startups today

Ranking on Google organically can be tough, but with Bitcoin there’s one major advantage – a lot of the keywords are still not very competitive. When I started out 99Bitcoins I targeted long tail keyword such as “how to buy Bitcoin with Paypal” or “how to buy Bitcons with a credit card” and got to the first page within 3 weeks.

Of course today this will be a bit harder to do but the idea is that targeting long tail keywords is probably going to give you to most ROI than any other marketing channel. So how do you know which keywords to target ? simple, just use tool like KW suggester or Ubersuggest to find out what people are already looking for. 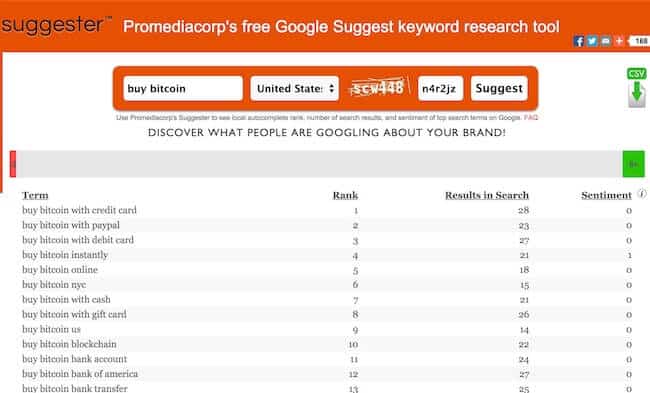 KW suggester is a tool which is like basically the Google autocomplete feature on steroids. You put in a key phrase like “buy bitcoins” for examples and it will show you the most popular completion to this phrase on google. Ubersuggest works the same only it goes through the abc the shows you for each letter what are the most popular searches.

Help develop the Bitcoin community in order to build your brand

What are some of the free tools you’ve used when you started out with Bitcoin ? I guess that Preev may be one of them. BTCQuote might be another if you’re a website owner. If you can find out what tools are missing that can be easily created you’ll be able to spread the word about your business faster.

For example, a few months ago I tried to figure out where would I get the best rate for buying Bitcons. I started manually comparing exchanges when I figured out that if there was a Bitcoin price search engine it would be much easier. Since there wasn’t anything like this to be found I decided to create one myself – CoinLlama. Today CoinLlama helps people decide where to buy their Bitcoins and also drives traffic back to 99Bitcoins. 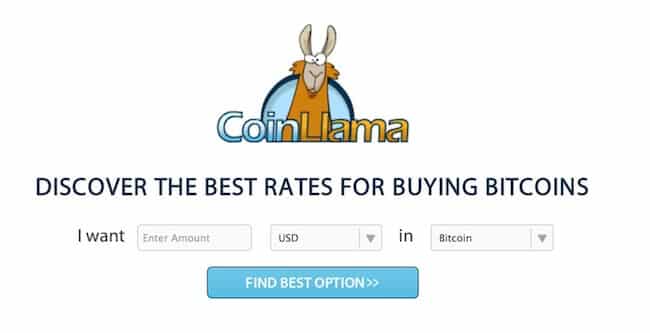 Other free tools the community uses include HowToBuyBitcoin.info – a comprehensive directory of Bitcoin exchanges and brokers, BitLegal – an overview of the current Bitcoin regulation status around the world and Bitcoin ATM map – a directory the different Bitcoin ATMs worldwide.

Public Relations was never my strong suite. I don’t like running around pitching my ideas to reporters, it’s too much work and it doesn’t bring enough value in return. That’s why I like to use “pull” marketing tactics when it comes to PR. Pull tactics mean you have reporters or blogger searching you out and not the other way around, here are the 2 methods I use:

I drafted a post about this and of course made sure to notify CoinDesk about this incident. I emailed people from their staff and tagged them on Facebook and Twitter. The result wasn’t encouraging – I just got a short email reply saying thank you. A few weeks later the same thing happened with CryptoCoinsNews – the same process got me a mention on the front page of their website plus the article was resubmitted to a lot of smaller Bitcoin blogs as well.

If you ever do decide to use “push” tactics which means to actively send out cold emails to reporters you can use Rapporto – a Chrome plugin that shows you information about email addresses. Read this post to find out how it can help you find different email addresses of reporters.

Don’t hide behind your company

After Mt.Gox collapsed a “trust issue” arose throughout the Bitcoin network. People got a slap in the face realizing they can’t go around trusting businesses that weren’t transparent enough with their money. Communicating who you are in a transparent and trustworthy manner is one of the most important aspects of your Bitcoin business. Let’s take as an example Coinbase’s “about” page.

See how each team member’s photo is vividly displayed linking to their LinkedIn profile? Also there is a clear company address and way of getting in touch. BTCJam is another great example of a transparent “About” page: 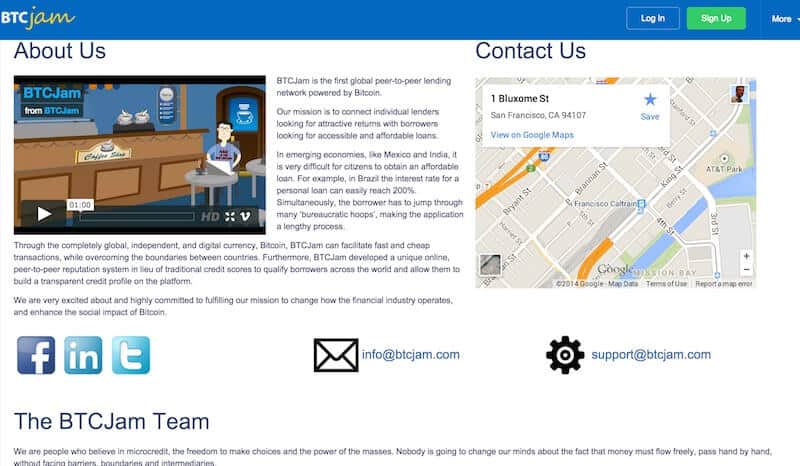 2 companies which I believe are not doing so well are BTC-E and a HYIP program called “Bitcoin-Trader”. Both seem to be very obscure about who is actually running their business. There’s nothing less professional than having your business be operated by “a team of professionals”.

That last marketing channel I’d like to talk about is affiliate programs or referral programs. Find a way to get your customers to become your marketing army. This can be achieved either by providing an outstanding service (creating magic moments like the giveaway example) or by giving a good enough incentive.

Coinbase gives its customers $5 worth of Bitcoins each time they refer a friend. BTCRobot, a company that I am less fond of, created a whole affiliate program so that people can actually make money from home by promoting them. In 99Bitcoins we hold a monthly giveaway contest and allow people to increase their chances of winning by getting their friends to sign up as well.

People want to gain value – they do so if they either be the first to discover an amazing deal or service (outstanding experience) or by actually receiving a monetary reward for their help. Find out which methods suits you more (perhaps both) and utilize it. An affiliate program can be very powerful, especially in the Bitcoin arena where there are almost no good programs to be found.

You can easily start and affiliate program by applying to an affiliate network and having them set up all of the logistics in return for a part of the revenue. However keep in mind that affiliates require attention. BTCRobot has a whole section of their website provided for affiliate. They also require support just like normal customers or else they will not promote you.

You just need to focus on one or two that you think are more relevant to your business and focus on them. I don’t suggest using all of the channels I’ve just described at once since it can be a bit overwhelming. In any case I’m always here to help so feel free to just leave questions at the comment section below or email me if you need some

12 comments on “7 Reasons Your Bitcoin Business is Losing Customers”